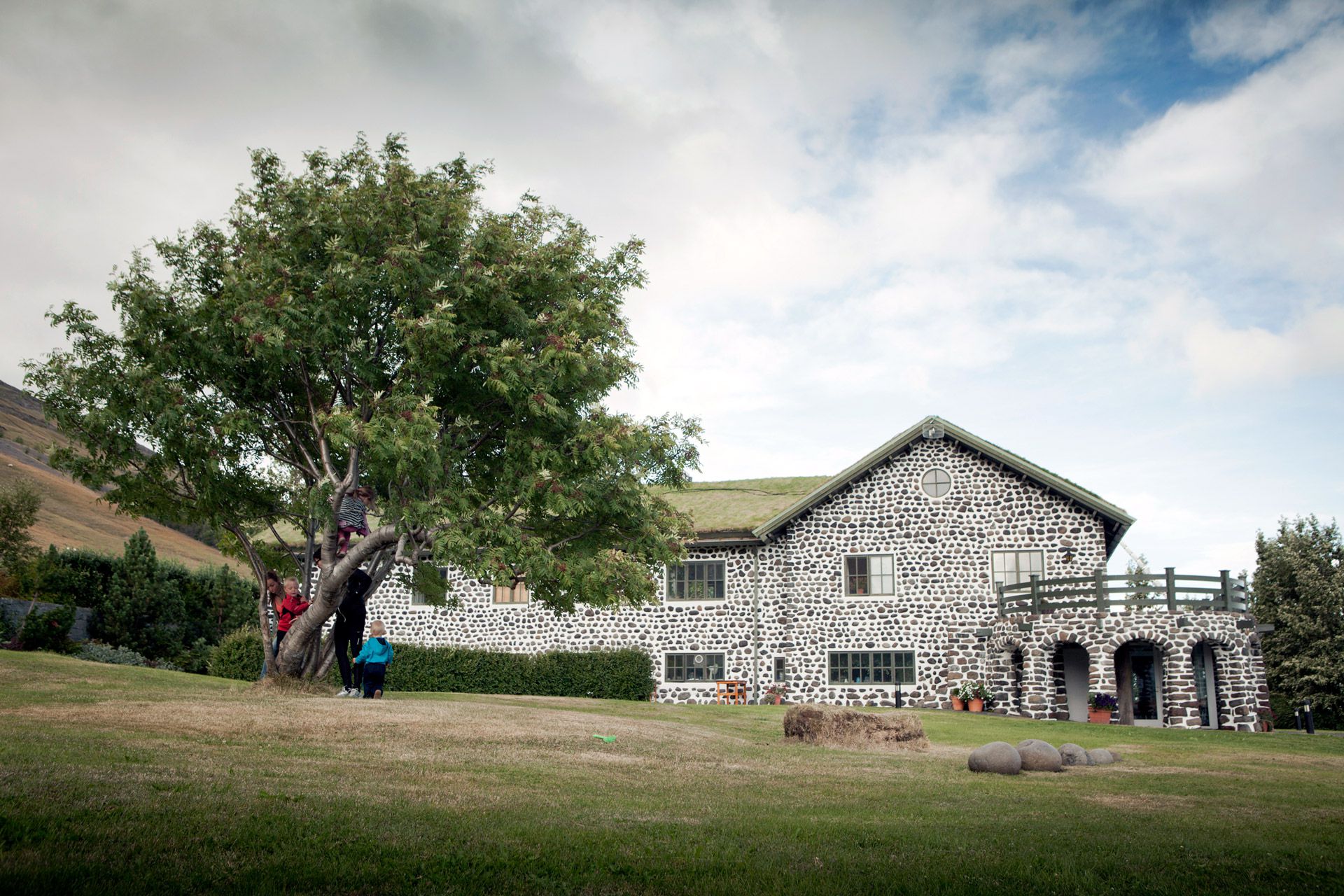 In 1939 the writer Gunnar Gunnarsson (1889–1975) had a mansion built as his family home on the farm Skriðuklaustur. The German architect Fritz Höger, a friend of the author’s, designed the mansion as well as the other buildings planned for the property, most of which were related to farming but were in fact never built. The mansion, however, remains a monument to the lofty intentions Gunnarsson had when returning to Iceland after achieving fame during his 30 years in Denmark.

The building of the house was an enormous project at the time and the cost of the building was similar to 10 houses being built in Reykjavík. From June to October 1939, between 20 and 30 people worked at the building, not including the maids and other helpers. In total it is estimated that about 100 people worked on the project. The workers’ log for the building records about 33,000 working hours for 64 people and and there can be no doubt there were more people involved, than is recorded in the log.

The architect Johann Friedrich (Fritz) Höger was born in 1877 near Hamburg, Germany. He studied construction and masonry but was self-taught as an architect. He ran a studio in Hamburg from 1907 and drew everything from residential buildings to churches and town halls.

Höger's name is known in German and international architectural history of the 20th century, as he was one of the pioneering North German brick expressionism (Backsteinexpressionismus).

Hagar's most famous building is the Chile House in Hamburg, which he designed for businessman Henry B. Sloman. 10,000 square meters of office building built in 1922-1924. The house's shape is unique, and it is one of the houses in Hamburg waiting to enter the UNESCO World Heritage Site.

Höger became a member of the Nazi Party in the 1930s and tried to bring his architectural style into the hands of the third-state administrators. However, the classic style of Albert Speer became on top and after 1935 Höger's style went out of fashion.

Fritz Höger was a great enthusiast of literature and wrote poems himself. He was a member of the Nordic Society German (Nordische Gesellschaft) and attended meetings of the poet group Eutiner Dichterkreis. It was through this forum that he met Gunnar and they became friends. They had had both risen from poverty to fame and fortune and had that in common. Their friendship lasted until Höger died in June 1949.

The famous Eagel´s nest myth. Sometime in the 60s or 70s, a story began to circulate in Iceland. The story was that the same architect had designed Gunnarshus and the so-called Hitler's Eagle nest, Das Kehlsteinhaus.

Das Kehlsteinhaus was built near Berchtesgaden in the south of Germany in 1938. The story appeared in print and became a widespread misunderstanding. There is no truth for these stories. The Eagle nest was design by the architect Roderich Fick, who designed additional buildings for the Third State commanders in Obersalzberg. And Gunnarshús, Skriðuklaustur by Fritz Höger. The style of these two houses, on the other hand, is similar and both take their look from the traditional southern German countryside.